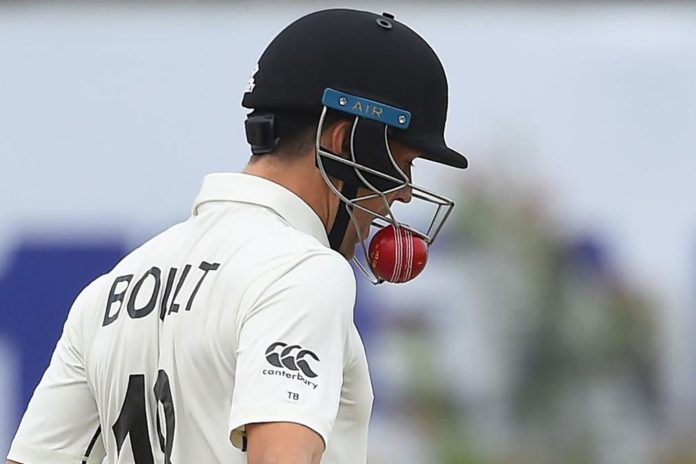 New Zealand pacer Trent Boult has produced one of its kind moment on the first day of the 1st test against the home team Sri Lanka.

During the 82nd over, Boult was on strike and Lasith Embuldeniya was bowling to him and Boult went for attempting a sweep shot but the ball took a top edge and got stuck into his helmet grill.

Boult has no idea where the ball went then the actioned resumed for a moment to check Boult’s condition and it went unnoticed.

Fans have taken the incident on social media with some quirky messages. Even the ICC official Twitter account has posted the picture of boult and captioned it as: “Caught and Boult.”

Hey @trent_boult you have mistaken it, it is not an apple it's a cricket ball, don't eat it…😆😆😆

Boult loves to catch the ball, even if he doesn't have hands here! 😉

Boult: Hello, listen to me, inform your friends that i am a master of swing and they should co-operate
Cherry: i cant hear, lemme come closer to you
😂😂😂😂

Earlier in the day pacer, Suranga Lakmal has taken four wickets as Sri Lanka was bowled out New Zeland for 249 on day two of the test.

After resuming from their overnight score of 203 for five, the tourists lost their last five wickets for 46 runs as Lakmal dominated.

Ross Taylor has been missed for a score of 86 on his first delivery in attempting a cut shot in Lakmal delivery and was caught behind. Then Santner got trapped by Lakmal and lost his wicket for 13.

Then William Somerville was caught by Akila Dananjaya but he successfully overturned the decision after a review. And Tim Southee was inches shorter and was run out.

Lakmal had his day removing Boult and Ajaz Patel in successive deliveries and finished with impressive figures of 4 for 29. He will on a hat trick when New Zealand will resume their second innings.

Kiwis will be very disappointed by batting performance as most of the batsmen started well but failed to make it in big numbers. And the play was resumed for 15 minutes due to rain.