Hobart Hurricanes will be up against Sydney Sixers in the opening match of the KFC Big Bash League 10 at the Blundstone Arena in Hobart. The match will be played on Thursday, December 10 at 1:45 PM IST. Here are HUR vs SIX Dream11 predictions, preview, squad and predicted XI.

Sydney Sixers have collected a poised set of players with a proper blend of all-rounders and match-winners in it. Moises Henriques will be leading the Sixers from the front. Josh Philippe and James Vince will open for the Sixers while the likes of Jason Holder, Daniel Christian and Carlos Bratwaite will carry the innings till the end. Jackson Bird, Sean Abbott, Ben Dwarshius and Steve O’Keefe will take charge in the bowling department for the Sixers.

As for Hurricanes, they have also managed to gather a redoubtable side in BBL 10. The team will be led by Matthew Wade, who is currently in a sizzling form in the T20 format. Wade recently scored 58 and 80 in the last two T20Is against India. However, they will be without the services of Dawid Malan and Keemo Paul who will be serving their quarantine period till December 18 and December 25 respectively. Sandeep Lamichhane will join the team on January. 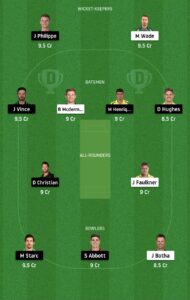 Our HUR vs SIX Dream11 prediction is that SIX will win the game.

Disclaimer: Please note that our Dream11 predictions are based on our own analysis and they do not guarantee positive results.