AUS vs WI Dream 11 Prediction: Australia, the only team yet to lose a series in the ongoing World Test Championship (WTC) 2021-23 cycle, will begin their 2022-23 home summer with an assignment, which hasn’t taken place for seven years. Australia and West Indies haven’t played each other in a Test bilateral since 2015-16 and the latter haven’t won a Test series against the hosts since 1992. The two teams are meeting each other after a long time at WACA on November 30, 2022.

The match is unfair in many ways, but nothing indicates that West Indies won’t give it their all. Australia demonstrated in the Ashes last year that they are perhaps the hardest side to defeat at home, second only to India.

The Men in Maroon, on the other hand, haven’t fared too badly either, drawing a series with Pakistan and defeating England at home. However, with Australia and South Africa still present and both away from home, their hardest test will begin in the closing months of the current cycle. Young Tagenarine Chanderpaul’s inclusion has given the series a little extra spice, especially after his two outstanding goals in the exhibition game.

AUS vs WI Dream 11 Prediction: Where To Watch

The game between Australia and West Indies will be telecasted on Sony Sports Network. Fans will be able to watch the live streaming of the AUS vs WI match on SONYLIV App.

AUS vs WI 1st Test Dream 11 Prediction: When To Watch

Perth will host the opening Test. As one of the quickest tracks, the surface here helps speed bowlers. The curator said there will be grass so we should expect pace and bounce. While the bounce and carry will be enjoyable for batters, the first session requires caution. Here, the first-inning average is 350.

AUS vs WI: Head to Head 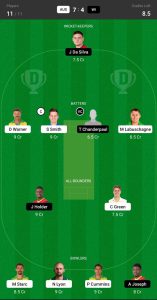 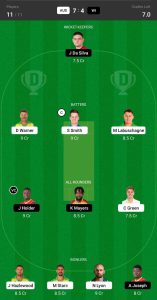