Virat Kohli and Co. will be eyeing to demonstrate a similar performance which the “Men in Blue” pulled off during their last outing against Australia in their own backyard. The visitors ripped apart the Warner and Smith-deficient Australian side back in 2018. The Virat Kohli-led side clinched the three-match ODIs series and historically downed the Australians in the Test series as well.

The Australians have been seemingly waiting for their revenge and their quest will commence with the first ODI between the heavyweights which will be played on November 27, 2020. India will be up against Australia for their first ODI at the Sydney Cricket ground from 9:10 AM (IST) onwards. Read more for AUS vs IND playing 11, AUS vs IND preview, and AUS vs IND Dream11 team.

Also Read | Five Indian Cricketers And Their Hollywood Crushes; Have A Look

India bagged a 2-1 win against Australia in their previous meeting in Australian soil. However, Australians were without their two top-holes David Warner and Steven Smith, who were serving their ban, when the Indians visited them back in 2018. With the re-entry of Warner and Smith in the side, the Indian bowlers will have to put on some extra muscles to make things easy for the visitors.

Apart from that, Indians will be without their season campaigner Rohit Sharma in the entire limited-overs series. Rohit Sharma, who has an impeccable record against the Aussies, has been handed rest from the Australian series considering his recent hamstring injury. Pacer Bhuvneshwar Kumar is out of the Indian squad after picking a hip injury during Dream11 IPL 2020. 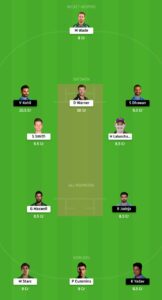 Stumpsandbails have come up with their own Fantasy11 predictor which will make user’s life easier while picking a fantasy 11 side. Our predictor, thanks to all the statistical algorithms implied in it, comes up with the three-best possible XI for your fantasy teams. Its unique feature also allows you to choose a specific player in your team or leave out a specific player from the predictions. All the fantasy XI predictions are made on the basis of detailed statistical research on player’s performance in the past in a specific format. 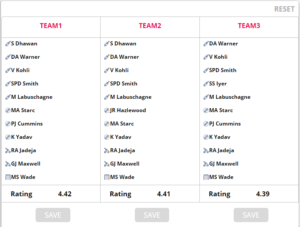 Click on the link below to try our predictor:

Disclaimer: The predicted XI is completely based on our research and does not promise positive results.