AUS Vs ENG 3rd ODI Dream 11 Prediction: Australia took their 2-0 T20 series revenge from England by defeating them in the first two games of the three-match ODI series.

In the third game of the three-match series with Australia, the world champions England will try to mount a powerful comeback. The English team performed poorly in the last two games, falling at least 30 runs short of a respectable score and losing by 6 wickets. While they lost the second match by 72 runs.

Australia, who tasted success in both the games will look to dominate in the final game on Tuesday to record a clean sweep over England.

AUS Vs ENG Where to watch?

The game between Australia and England will be telecasted on Sony Sports Network. Fans will be able to watch the live streaming of AUS Vs ENG match on Sonyliv app.

ENG vs AUS When to watch?

Spinners are less likely to benefit than pacers. Early on, the pitch helps bowlers by providing good bounce. As the game goes on, batters are able to score runs.

The rain god is in favour of a safe third One-Day International between Australia and England, therefore the weather will be good throughout the day.

Toss will play a decisive role, as the pitch is noble for the batting first team, so the skipper who wins the toss would like to bat first.

David Warner, who is currently ranked No. 6 among ODI batters, is in top form and will want to keep it up in the third ODI because the wicket is conducive to his approach to the game.

In the second ODI, Moeen Ali captained the team in Buttler’s absence. He is an excellent and reliable all-rounder, and he will certainly be the man that everyone wants in their dream team.

Among Australia’s primary bowlers, Adam Zampa took three wickets in the first match and four in the second, and he will seek to continue his dominant style in the third ODI on Tuesday.

The reliable batter of team Australia, who played knocks of 80* and 94 in the first two games, respectively, will be the ideal choice to pick as captain for your dream 11 team.

As a dependable hitter for team England and since ODI cricket fits his style of play (anchor), the centurion Dawid Malan (134 off 128) and player of the match in the first ODI will probably play a similar kind of knock. However, in a rare occurrence, he missed in the second ODI.

ENG vs AUS Head to Head

Out of 154 games played between Australia and England, Australia won 86 times, England claimed success in 63 games. 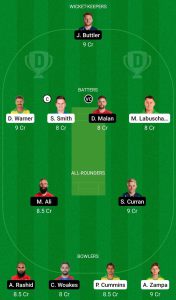 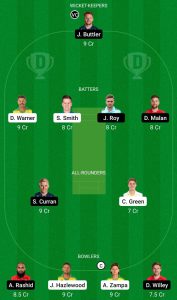