Also Read | IND vs AUS: What Made Ravichandran Ashwin Cry After The Sydney Test?

Assam had a season to forget the last time they participated in the Syed Mushtaq Ali trophy. Assam managed to win only one game in their 7 outings in the 2019-20 campaign of the Syed Mushtaq Ali trophy. Nevertheless, the Assam-based team made a positive start to their on-going season with a nervy win against Hyderabad in their first match. As for Tamil Nadu, they dominated Jharkhand in their first match of the tournament. Tamil Nadu bagged a 66-run win against Jharkhand. 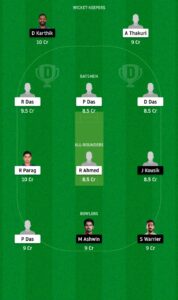 Also Read | Watch: Ashwin As Don, Pujara As Baahubali And Pant As Sultan While Facing The Aussie Bowlers

Our ASM vs TN Dream11 prediction is that Assam will win the match.