As 2019 has come to its end, many players and experts of the cricket match come up with their fantasy match of eleven and choose the best cricketer of the decade as well. Team India’s former opener and commentator Aakash Chopra too named his best match eleven. As 2019 has been also marked the end of a decade, Aakash Chopra chose his batsman, bowler, wicketkeeper, and all-rounder of the year 2019 in T20Is.

The 42-year-old former cricketer and batsman has shared his three chosen ones on social media were the named the current captain of Team India, Virat Kohli, as the best player and Sri Lankan Team speed bowler as well as the captain of his team in the T20I match. Lasith Malinga was one of the finest bowlers of the 2010s in the shortest format match, according to him. Kohli and Malinga have been named the best batsman and bowler as per Chopra’s list. He chose England’s Buttler as the finest in the wicket-keeper category. 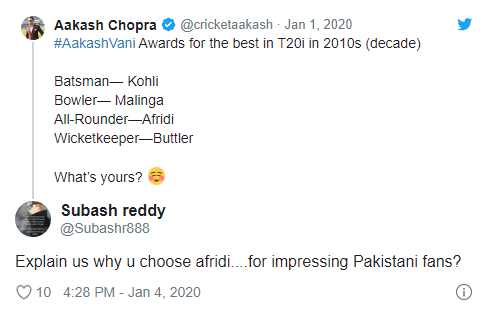 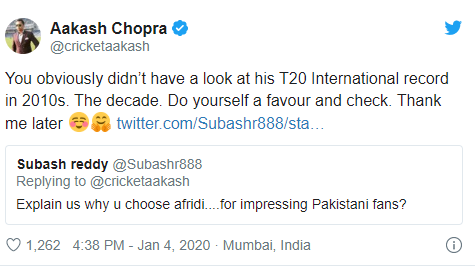 Aakash Chopra has tweeted that, “Explain to us why you have picked up  Shahid Afridi….for impressing Pakistani fans?” a Twitter user told. Chopra swiftly gave the answer and he asked the user to go through the records and achievements of this former Pakistan captain. “You obviously do not have a look at his T20 International record in the 2010s. The decade. Do yourself a favor and check. Thank me later”.