Auckland have yet to taste a win in the Super Smash 2020-21 tournament. They are yet to make a mark in the tournament. The Robert O’Donnell-led side have reached close to the winning line but have failed to cross it so far in the season. Despite having a strong line-up they have not won a game till now. Auckland have nothing to lose and they will play with a free mind in the upcoming clash. As for Central Districts, they are on the second spot of the points table. They have managed to win five games out of the seven they have played in the season so far. They will look to dominate the clash against Central Districts. 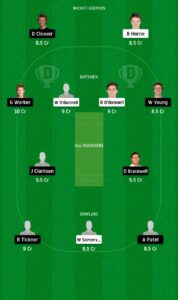 Our AA vs CS Dream11 prediction is that Central Districts will win the clash.