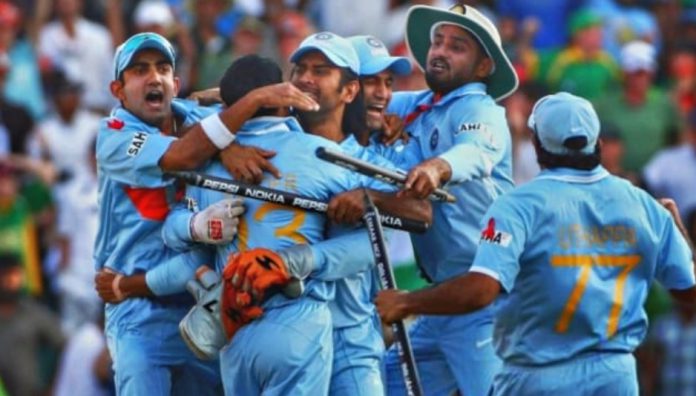 The Indian team selected for T20 World Cup 2007 was termed as a bunch of no-hopers. Indian stalwarts comprising the big four and Zaheer Khan chose to skip the event. MS Dhoni was tasked with leading the side in the competition. India had all but just a single game of experience before the T20 World Cup. There were absolutely zero expectations from the side.

The first round thrill:

India had to face Pakistan in the opening round of the competition. Their game against Scotland was called off owing to rain. The winner of the game between the arch-rivals would top the group. Pakistan started as overwhelming favourites for this game. India batting first posted a sub-par score of 141.

But their bowlers kept Pakistani batsmen in check. It appeared all too easy for the Indian team. But a certain Misbah-ul-Haq took the game deep. Pakistan needed just a solitary run off two balls. But India applied the choke to take the game to a bowl-out. India outwitted Pakistan to win the bowl-out 3-0. They topped the group.

Super 8s – The twists and turns:

India started off their Super-8 journey on a slippery note. They lost a close game against New Zealand putting their progress in tricky waters. India had to win both their remaining games to ensure a spot in the semis. They squared up against England at Durban.

India’s openers laid out a strong foundation for the middle-order to cash in. Yuvraj Singh till then hadn’t really announced himself on the big stage. All it took was an over. An over that changed India’s fortunes forever.

Yuvraj Singh and MS Dhoni were at the crease at the end of the 18th over. Andrew Flintoff provoked Yuvraj Singh. A fired-up Yuvraj was facing Stuart Broad. Yuvraj went bang bang smashing six sixes to trigger a sea of celebrations. India went on to win a high-scoring game.

Knocking out the home team:

India’s next opponent was South Africa. It was a do-or-die game for both teams. India was up against the odds as South Africa was relatively comfortably placed. The Indian team was jolted early choosing to bat first. A young Rohit Sharma announced his arrival on the world stage. He stroked a fifty in his debut international innings.

India posted a formidable score of 153. But it was India’s bowling and fielding that managed to pull off one of the biggest upsets in the tournament. India stormed into the semis topping the table.

India had Australia to contend with in the semis. The four-time world champions started outright favourites in this game. India batting first was unable to break the shackles till 8 overs. They were 41-2 at the end of 8 overs.

Yuvraj Singh and Robin Uthappa then put on a show for the ages. India notched up 188 runs in their essay. Yuvraj’s 30-ball 70 still remains one of the best T20I knocks of all time. India won a humdinger of a contest and made their way into the finals.

The arch-rivals met once again:

India and Pakistan had contrasting journeys into the finals. Pakistan remained unbeaten throughout the super 8 stage while India had lost just one game so far. But Pakistan’s experience playing the T20Is gave them the favourite tag for the final. India scored 157 runs batting first thanks to Gautam Gambhir’s breezy 75 and Rohit Sharma’s superb cameo.

The game kept switching from one team to the other. It all came down to the final over. Pakistan was just a hit away from winning the title. But Dhoni’s gamble paid off. India won the World Cup in the most dramatic fashion. They became the inaugural T20 World Cup champions. India’s win led the way to the IPL. Their win changed world cricket forever. It has been 15 years since and the win still lingers in the hearts of Indian cricket fans.